Please be aware, this article could be triggering if you are struggling with food. Don’t read it if it makes you feel uncomfortable. If you have any questions or want any help, follow the links at the bottom of the page, or message me. 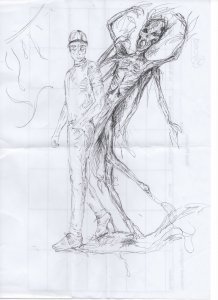 A drawing made by a friend who also suffered from an eating disorder. Thank you, I hope you don’t mind me using it!

The words eating disorder are used a lot: I’ve used them coutless times over the last few blog posts. And raising awareness that they are out there, that they are potentially fatal, that they need to be more widely recognised, is all great. But for people who have never experienced one, it is difficult, if not impossible, to actually know what it is like to suffer from one. Likewise, people who may be suffering from the umbrella-term ‘eating disorder’, may not actually realise what it is that they are going through and that they need help. This is my attempt to try to explain what it feels like, and the signs and symptoms to be aware of. I have tried to list the signs and symptoms of different types of eating disorders, and below that, I’ve given a brief outline of what my psychological experience of an eating disorder was.

A recent YouGov poll showed that 34% (one third) of adults could not identify the symptoms of an eating disorder. 79% could not identify any psychological symptoms. Given that this is a psychological condition, that’s not a great statistic. Of those who did identify a symptom, they were two times more likely to list weight loss or ‘being thin’ over psychological symptoms. I think this shows just how far we still have to go to change public perception about the reality of the mental illness that is an eating disorder.

According to Beat (and to common sense) the lack of awareness stops sufferers from getting treatment they desperately need. That’s because they themselves may not understand what they are going through, and because those around them are not aware of the signs and symptoms to look out for. Before we go any further: you DO NOT have to be under weight to be suffering from an eating disorder.

There are three main diagnoses (though there are others): anorexia nervosa, bulimia, and OSFED (other specified feeding or eating disorder). All three are as serious as the other. Just because you may not fit into one of these categories, does not mean that you are any less worthy.

An eating disorder, whichever medical category it may fit into, may feature behaviours associated with each one. Limiting your food intake, eating a lot at once, and getting rid of your food in harmful ways (purging, fasting, excessive exercise) can all be experienced together, and it’s not rare for people to go through different diagnoses. Eating disorders are not straight forward: they are messy and painful and destructive.

The signs and symptoms of an eating disorder can be broken down into three groups: physical, behavioural, psychological. And please remember, the physical group is the least significant in terms of suffering from the illness: you can be at any weight and still struggle with an eating disorder. I focus here on the behavioural and psychological, as they are the most overlooked but most important.

Click on the following mind-maps to enlarge the behavioural and psychological symptoms of different eating disorders. But remember, these lists are not exhaustive, and someone may experience symptoms from different categories. All are just as important. 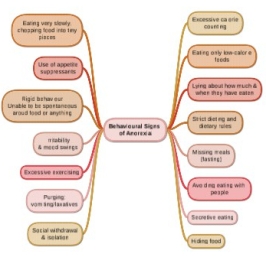 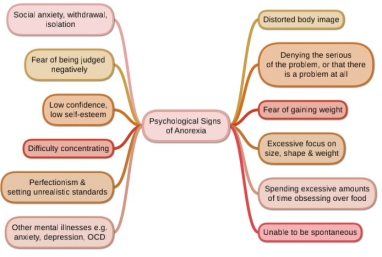 Below, I have outlined some of the psychological symptoms I suffered with. Please note, I was diagnosed with anorexia, so what I experienced may not be the same as others with other categories of eating disorders. What I have tried to do is show how this illness is fundamentally a psychological one.

Until you begin to move away from your eating disorder, it’s hard to see just how all-consuming the illness is. Of course, there are the physical symptoms, in my case it was rapid weight loss, fatigue, poor sleeping patterns, lack of concentration, feeling constantly, bitterly cold. But that’s just the surface. Underneath, the illness takes over almost every thought process.

I became obsessed with food. I would be sat in the library, supposedly working, but scrolling instead through my Instagram feed, addicted to pictures and videos of food, constantly searching up recipes and storing them, but never, ever using them. I thought about food from the moment I woke up, to the moment I fell aslepp: what was I going to eat today? When is an ok time to next eat? What can I allow myself? What should I have for tea, if anything? What will I eat tomorrow? Oh, that looks delicious, I couldn’t possibly eat it though! It was a never ending, exhausting stream of thoughts, much like how a drug addict can’t stop thinking about when they will get their next hit. Only with anorexia, it was not doing something that gave you that high. This obsession with food and planning what I would eat gave me a sense of control that I lacked elsewhere in my life: I felt in control, and when I was able to stick to what I had planned, I felt a high that I couldn’t get anywhere else.

When it came to chosing to eat, I could stare into the fridge for hours, going through reasons why I couldn’t eat certain things. I remember pacing around the city I was living in, going into different cafes or shops, determined in my right mind that I would get something, but running out empty handed. I would wander for hours like this. The walking also helped burn off calories, while the self-denial of food felt good.

And that’s because the illness had numbed me to most other emotions, other than fear and anxiety. As thoughts about food and weight filled my head, there was no space left for other thoughts and emotions. And as I continued to lose weight, cognitively and physically, I was not able to feel as my brain and body shut down.

Then there was the anxiety. Anxiety about everything. As I became more controlling about food, I became more controlling about life in general. I could not cope with spontaneity, with changing plans. I couldn’t cope with people, full stop. Constant worrying that they were judging me, that I was inadequate, that I shouldn’t be there rushed through my head, making any social activity a stressful nightmare. I even missed one of my best friend’s birthday parties because I was too scared to leave the house. Relationships begin to break down, you become lonely and isolated. Most of all, you are scared. Scared of other people, of what they might think. You are scared of eating, of putting on weight because that means you are out of control, that you are a bad person. You are scared of not eating because, in your right ming, you know that this is wrong, but you can’t stop. Your rational mind is paralysed by the illness, which scares you just as much as the thought of eating or socialising.

The intense guilt and anger and sadness and fear after eating is unbearable. I would resolve not to eat again for a long time to make up for it, or go for a run to burn it off. As I entered treatment, I began to purge to get rid of what I had put into me. Food was the enemy. Weight was the enemy. But so was myself. I hated myself. Life was no longer worth living.

If you or someone you know may be suffering with an eating disorder, here are some links to find out more information about the illness and treatment. Please don’t think you’re not ‘ill enough’: if you need help, ask for it…

One thought on “Eating Disorder Awareness Week (3): What exactly is an eating disorder then?”