When I first started this blog, I had just left inpatient recovery after 10 months of treatment. That was nearly 2 years ago now. A lot has happened since then: great things, things I could only have done this side of ‘recovery’. I’m writing this post from Cusco, Peru, where I’m currently volunteering and fulfilling a life-long dream to visit this amazing country. To be here was unthinkable just over two years ago.

I’m not writing this for congratulations, sympathy, or for self-aggrandisement. Far from it: writing such posts is a pretty uncomfortable exercise. This post in particular is hard to write because I have to admit some hard truths. I also hate writing in the first person – but here goes.

The purpose for this piece is two-fold: firstly, to reiterate that long-term recovery is possible. There is life beyond an eating disorder. And that’s something I would stress to anyone who is currently suffering from whatever manifestation of this life-destroying illness. When you are in ED’s grips, you cannot see a future. You live only in the moment, blind to everything else around you. And yet it was determination not to let ED steal my future that eventually (and this was a long, painful process) allowed me to take the first steps along the path to recovery. Don’t give up on a future you deserve.

Long-term recovery is possible: don’t give up on the future you deerve

But it is also a kind-of update on a post I wrote in the beginning about letting go of your eating disorder in order to recover. I still stand by that. As long as you hold onto a single aspect of your disorder, accommodate it in the slightest way, continue to let it have some kind of hold over you, you cannot fully recover. 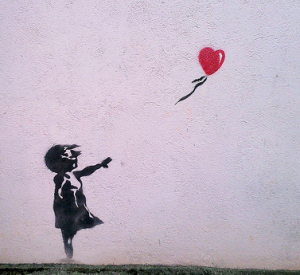 But letting go is hard. It’s painful. It’s exhausting. You’ll find yourself wanting to give up, sometimes actually giving in, taking one step forward, two back. The disorder tricks you into believing that you need it to survive: that it is there to protect you from the world and from yourself. It comes to define you, becoming a central part of your identity.

Further along the road of recovery from those first posts, I now know that this is even more complicated than it seemed. It’s not only the fact that even now it can still be difficult to distinguish between your own thoughts and those tinged by the memory of ED, but also the fact that as you transition through stages of recovery (and I’m talking long-term recovery), that relationship between your self-identity and the disorder evolves, becomes more complicated. If you don’t approach it correctly, the illness can maintain just enough residual power to tip the scales at any point towards relapse, however big or small.

The danger of complacency

Let me try to explain that better. I finally returned to university last September after the interruption forced by the eating disorder. It felt amazing to be back and I dived head first into uni life (as much as a final year can, anyway). That first term was incredible: I felt so free and so excited to be back in London, living again. No longer was I defined by the eating disorder: I was back on track. I began to define myself as someone who had beaten the eating disorder – and that felt great. I believed that I had left the disorder behind, transitioning from ‘someone with an eating disorder’, to ‘someone in recovery’, and now to ‘someone who has recovered’. A simple 3 step process along the road to freedom.

But I became complacent. As I increasingly defined myself as ‘post-ED’, I became less vigilant: I took my eye off the ball. So soon after leaving inpatient recovery, I should have been more careful – a year might sound like a long

time, but studies show that the average recovery time for anorexia is 7 years. How I had come to define myself helped to bring on what I’ll call a ‘blip’ just after Christmas. Over-confidence in where I was in terms of recovery had led to complacency, which opened the door to ED. The disorder, depression and anxiety hit back with a vengeance, to the point where I nearly destroyed some of the best things to come out of the first term back at uni.

Thankfully (luckily?), I was able to pull myself out of that downwards trajectory, with the help of meds and the strategies I had learned from my time in inpatient recovery: mindfulness, journal keeping, a more structured diet, etc. Two important lessons here: never come off meds early, or think that you are lesser because you are supposedly only functioning because of chemicals. Medication can make a world of difference. Secondly, never think you are beyond what you learned in recovery: those skills are useful in all aspects of life, not just in terms of eating disorders, and will help keep ED away.

Medication can make a world of difference 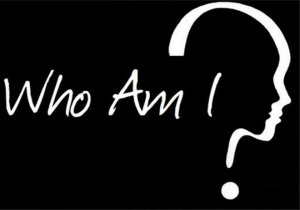 But the whole episode caused a real crisis of identity: I had been someone who had defeated ED, hadn’t I? And now he was back, though thankfully not for long. That ‘simple’ three step transition – a load of crap! That in itself caused even more anxiety because if this could happen so quickly, how could I class myself as properly recovered? What would happen in the future?

I got back on track. And yet I was more aware than ever of the presence of the old enemy. And recently, away from home, living a lifestyle that is totally alien but amazingly exciting here in Cusco, I’ve been even more conscious that the label ‘post-ED’ is both very wrong and potentially dangerous, because I still need to be vigilant of my thoughts and my feelings; of creeping disordered thoughts which might possibly influence behaviour.

It’s hard to write this, because I really did feel I was further on than maybe I am. There’s an element of shame, of disappointment, of guilt, but writing this helps in some ways to challenge those feelings

ED has taken advantage of this unprecedented situation to try to make come backs. At times, I’ve found myself making decisions that are swayed by the memory of ED, and I’ve experienced mood-dips which can potentially allow the disorder a foothold. I didn’t think this could happen to me anymore. I thought I had left this behind (again) but apparently not. And so I have to be extra-vigilant, extra-aware of the thoughts and feelings that can charge through the brain at any moment. I’m still in control, not ED – but his presence is haunting.

It’s frustrating, because it feels like there is something pulling you back, as if you are tethered to the shore while you are trying to swim off into the great unknown. I thought that I had severed that rope a long time ago, but I now have to accept that, however much I wish it wasn’t, that rope remains tied around my waist with the ability to pull me back if I allow the force on the other side the chance. I have to keep on swimming, until the rope runs out and I can reach out to that horizon.

Recovery is never a straight path: it winds and twists and climbs and falls 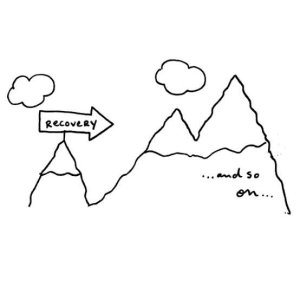 Have I been trying hard enough? Have I been pushing hard enough away from shore, away from the comfortable and the known? Perhaps not. Perhaps I should be further into the ‘big blue’. But ‘should’ is never a helpful word. I am where I am. I think an important rule for recovery is to never judge where you are or expect more of yourself than is possible: measure your progress on what you have achieved already, not on where you ‘should’ or ‘could’ be. Just because you still hear ED’s whispers does not mean you have taken a step back – it’s just part of the recovery process. I’ve said so many times that recovery is never a straight path: it winds and twists and climbs and falls. The important thing is to just keep going, however much of a struggle that can be. As I’ve also said before, while doing the opposite to what the disorder wants is the best weapon against it, it’s bloody hard work all the time.

I suppose the message of this (rather rambling) post is not to be complacent when in recovery. Don’t rush to define yourself as ‘recovered’. Recovery is a long, slow process and you have to be patient and prepared for trips and slips along the way, for the rope to pull back sometimes. You have to be prepared to keep on swimming against its tug.

Unfortunately, not fully, however much I would like to say I was. Where does that leave me? I don’t have the answer, but maybe that’s a good thing, because answers (or supposed answers) were what caused complacency in the first place. Plus, what does ‘full recovery mean anyway’? What I can say is that recovery thus far has allowed a life that ED never could, and that’s so important to keep in mind. I’ll never go back, but that doesn’t mean that ED has been totally expunged – yet. Until then (and I have to hope that one day there won’t be any trace of that illness 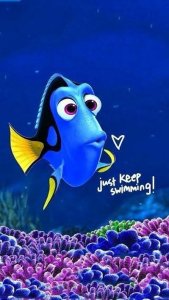 in my life), the important thing is not to become complacent, stay vigilant, and don’t worry about where you are or how to define yourself: this road is your own to travel. Keep going, stay vigilant of potholes and wrong turns: freedom awaits somewhere.

If you or someone you know may be suffering with an eating disorder, here are some links to find out more information about the illness and treatment. Please don’t think you’re not ‘ill enough’: if you need help, ask for it...